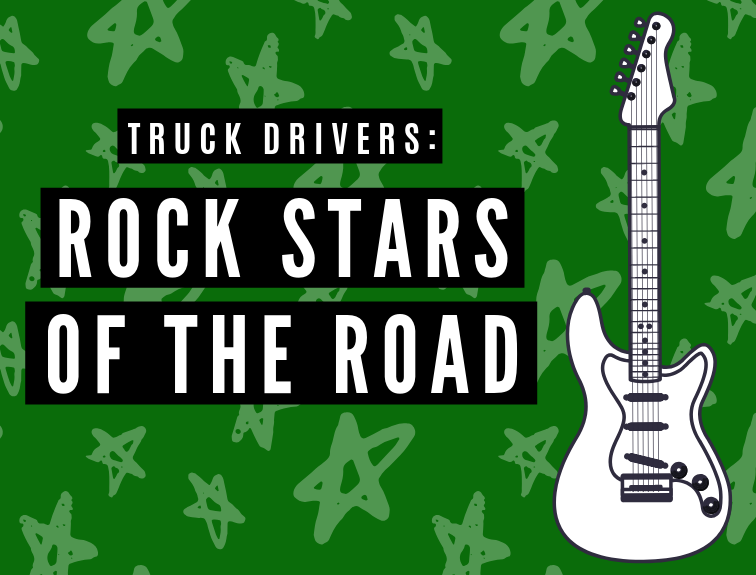 Celebrating the Rock Stars of the Road

National Truck Driver Appreciation Week is September 8-14, 2019. This is a time for the business community to recognize the dedication of professional truck drivers. Thousands of trucking companies and industry suppliers throughout the country will be holding special events to honor their drivers. As we celebrate this week, we’re also taking a look at some rockin’ facts about truck drivers as well as their connection to the music industry!

Utter the words “breaker, breaker” and trucking movie classics like Smokey and the Bandit come to mind. The 70’s were a time of free expression and open roads. The appeal of the CB radio took hold of the nation and suddenly truck drivers were of great interest. The music industry took notice and started turning out road trip hits.

Country music crooners and rock and roll legends produced songs that told the story of the long and winding road. They sang about the trials and tribulations that truckers face on a daily basis. Songs of love, loneliness, and driving took hold of the airwaves. These hits included:

Celebrities That Were Once Kings of the Road

Before becoming the King of Rock n’ Roll, Elvis Presley was “King of the Road,” as a truck driver for Crown Electric. At his first performance, he was told “stick to truck driving.” Lucky for us, he didn’t take that advice and became one of the world’s most well-known musicians. Several other famous celebrities also started their careers on the open road.

Truck Drivers Are Essential to the Economy

Truckers still face many of the same issues that drivers dealt with in the 1970’s. But, today, they are looked at as the Rock Stars of the Road. There is a much greater appreciation for the work truck drivers do to keep our nation prosperous. Chris Spear, the President and CEO of American Trucking Association, recently stated:

“Everything that we consume – groceries, school supplies, clothes, medicine – gets delivered by a truck driver whether it’s to your front door, your local market, or your workplace. These drivers improve our quality of life by dedicating themselves to safety and making every effort to deliver the things we need efficiently, professionally and responsibly.”

Diesel Driving Academy is proud to participate in National Truck Driver Appreciation Week. If you are ready to hit the open road, contact us today to learn more about Class A CDL training.