A new autonomous, self-driving truck was unveiled at the Hoover Dam earlier this week. Daimler introduced “Inspiration,” the first self-driving semi-truck licensed to drive on public roads, and were inviting members of the media for test-drives to show off this new automated technology.

Thanks to its state license, Inspiration could be used to ship goods between Reno and Las Vegas, using the states highway system. However, Daimler isn’t in the logistics business, and it won’t yet be doing that just yet. Instead, they will use the truck to conduct more test, and to show off what it can already do. 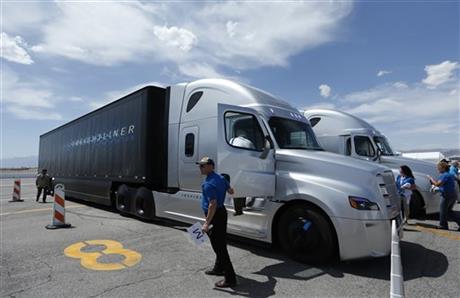 The truck and technology isn’t quite ready for everyday reality.

“We’re far from that. We’re just getting people inspired,” said Dr. Wolfgang Bernhard, member of the board of management of Daimler AG.

This is just the first steps toward this type of technological advancement. Legal and philosophical questions remain, as does perfecting the technology.

Daimler Trucks North America president and CEO Martin Daum said society might forgive a number of deaths caused by tired truck drivers at the wheel but they would never forgive a single fatal crash blamed on a fully automated big rig.

But, the company has no intention of ditching drivers. Instead, the driver would be more of an on-board logistics manager.

Technology companies and consumer car makers have been toying for years with making and selling autonomous cars. Some of this technology is already in place and appearing in passenger cars today – including features like blind spot warnings, automatic parallel parking and braking assist.

Still, “we believe that before passenger cars will be cruising around in suburbs, long before that, you will be seeing heavy trucks running on the interstate highways,” Bernhard said. There are no intersections, no red lights, no pedestrians, he said, making it a far less complex trip for a truck to make.