The “Transition Trucking: Driving for Excellence” award was first launched in 2016. The award recognizes veterans, national guard members and reservists who have successfully transitioned from military service to a career in the trucking industry. First year, former military personnel truck drivers are nominated by their carrier employers for the chance to win a fully-loaded Kenworth T680 truck.

We talked with 2017 DDA graduate, Summar Hanks, about her route to making the Elite Top 10 for the 2018 Transition Trucking: Driving for Excellence award.

UPDATE: We are extremely proud to announce that Summar has made it through to a Top 4 spot! She is now in the top running for the new Kenworth T680. Voting begins November 2018! 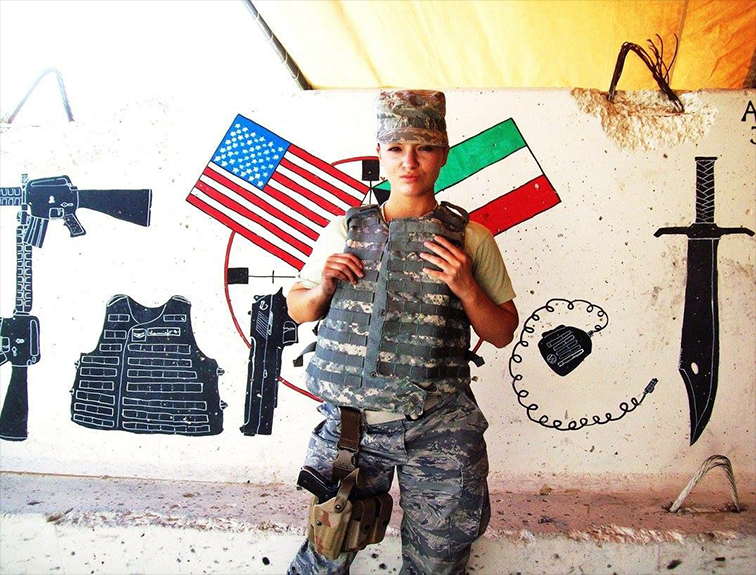 Summar was born and raised in Crowley, LA and began her military career in July 2008 as an active duty member of the United States Air Force before switching to the Louisiana Air National Guard and starting her trucking career. She enrolled in our Advanced CDL training program at the Diesel Driving Academy Baton Rouge campus and graduated in May 2017. She holds an Associates degree in Applied Science, Information Management, and will soon graduate with a degree in Business Management from Trident University.

Where did you grow up and what did you do for fun as a kid?

SH: I grew up in the small town of Crowley, Louisiana. As I kid I enjoyed anything outdoors. I was rarely ever indoors. My hobbies were drawing, biking, fishing and I have a love for music.

What branch of the Military did you serve in?

SH: I served from July 2008 to November 2016 as an active duty member in the United States Air Force then I switched to Louisiana Air National Guard. I’ve been in for a total of 10 years and just reenlisted for another 6 years.

What made you choose this Branch?

SH: I can’t really say what made me choose this branch in the beginning. I didn’t really know much about the branches and what they had to offer. I knew I wanted to serve and I had many reasons why. Some reasons being I wanted a variety of opportunities, benefits, and to travel. I didn’t want my folks spending money on me when I can provide for myself. The unknown scares some people but for me it’s an adventure. I decided to go speak to some recruiters in Lafayette, LA before graduating high school. There were recruiters there from every branch. The Air Force told me exactly what I wanted and needed to hear. I left for basic training a month or so after graduating from Crowley High School.

What did you do in the Military and where did you serve?

SH: My job in the Air Force basically falls under communications. The title has changed over the past few years from Knowledge Operations Management to Information Management, to Administration. Being I recently hit my 10 years in service I decided to learn a new trade. I am currently switching jobs in the Air National Guard to Pavement and Construction Equipment which falls under Civil Engineering. I will be doing 5 months of training in Fort Leonard Wood, MO

I did a lot of traveling stateside and overseas, however, I had the pleasure to be stationed in Abilene, TX at Dyess AfB, Gulfport, MS at the Naval Construction Battalion Center, Kuwait, Yongsan Garrison in Seoul, South Korea, Creech AfB near Las Vegas, NV, and now I’m at the Naval Air Station Joint Reserve Base in New Orleans.

DDA: What did you enjoy most about your service?

SH: If I had to choose one thing I enjoyed the most, that would be performing Base Honor Guard duties. I was selected to do this within my first two years of service and I’ve volunteered for it ever since. (Military Honor Guards. … A primary purpose for the Honor Guard is to provide funeral honors for fallen comrades and to guard national monuments. An Honor Guard may also serve as the “guardians of the colors” by displaying and escorting the national flag on ceremonial occasions at official state) 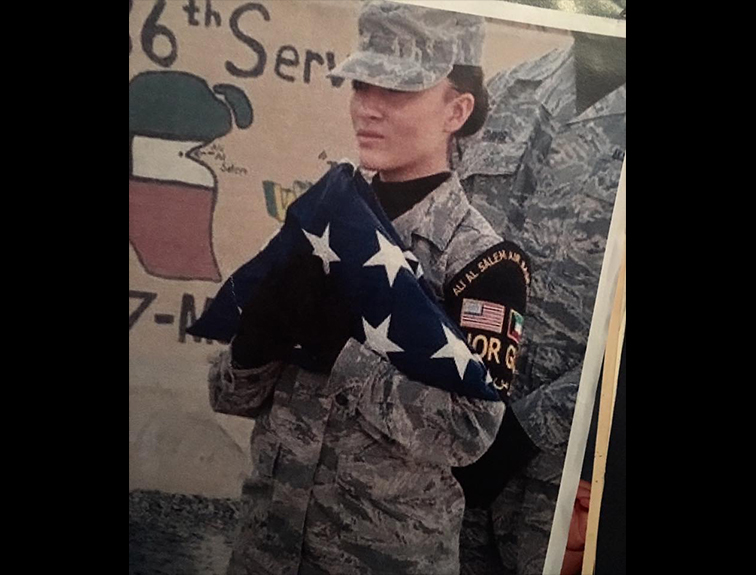 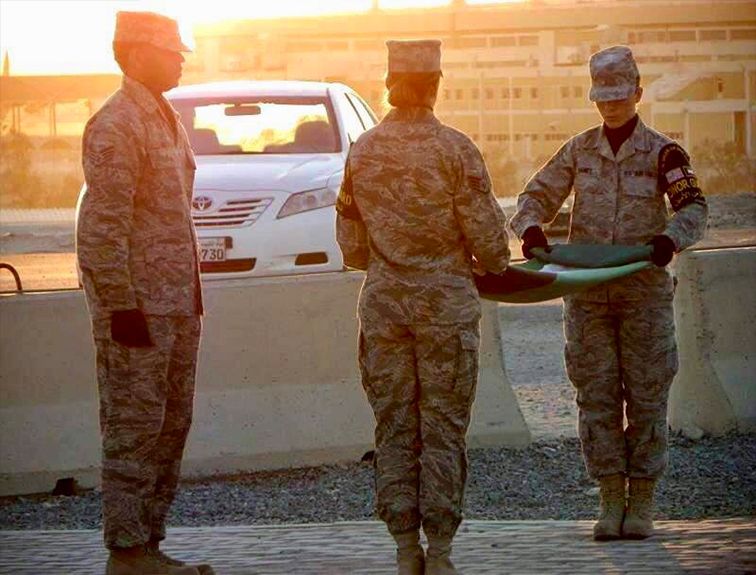 SH: I’ve always been interested in trucking. I think what started it was when I’d be traveling from base to base or going back home and I would stop to fill-up at a truck stop. I’d think to myself, how great would it be to get paid to travel. Driving all on its own is something I simply enjoy doing. The more I thought about it and continued to observe truckers the more I wanted to make this dreams come true.

DDA: How did you pick Diesel Driving Academy?

SH: I did some research while I was stationed at Creech Air Force Base in Nevada. At this time I knew I was switching from active duty to Air National Guard and was approved for my new base in New Orleans. I called Diesel Driving Academy and began the process. They accepted Post 9/11 (Post 9/11 GI Bill®) and had school options that could benefit anyone.

I chose the five-month school (Advanced CDL program) because I wanted to make sure I was 100% prepared for the new career I was going to begin. I don’t regret it one bit. If I could do it all over I would pick the exact same school, the same length of course, and the same company I chose.

DDA: What campus did you attend at DDA?

SH: I attended Diesel Driving Academy in Baton Rouge. I pulled my fifth wheel camper to a nearby campsite and attended this school from Dec 2016 to April 2017.

DDA: How has your first year been on the road?

SH: My first year on the road has been great. It’s even better than I imagined. I really enjoyed driving cross country the most. Right now I am on a Walmart dedicated account in Hammond, pulling refer, because I need to be close by for military duties. Although I really enjoy this too, there’s something about being on those open roads, stopping at interesting places across the country. Your truck is your office, your home, and your friend. Be good to it and it will be good to you.

DDA: What cities/places have you gotten to visit that were interesting?

SH: So many! My favorites so far are San Francisco, New York, New York, and Portland, Oregon. We have a drop yard in Kearny, New Jersey and I had some downtime so I took an Uber downtown New York. I had never been to New York before.

DDA: Has anything funny happened on the road yet?

SH: I had a military event to attend in Carlisle, Pennsylvania so I decided to get approval to bring my dad. He’s never really been in a tractor like that before so the entire drive from Louisiana to Pennsylvania, he stayed in the front passenger seat buckled up for dear life. He taught me how to drive but still couldn’t go to sleeper birth because “he needed to see the road.” 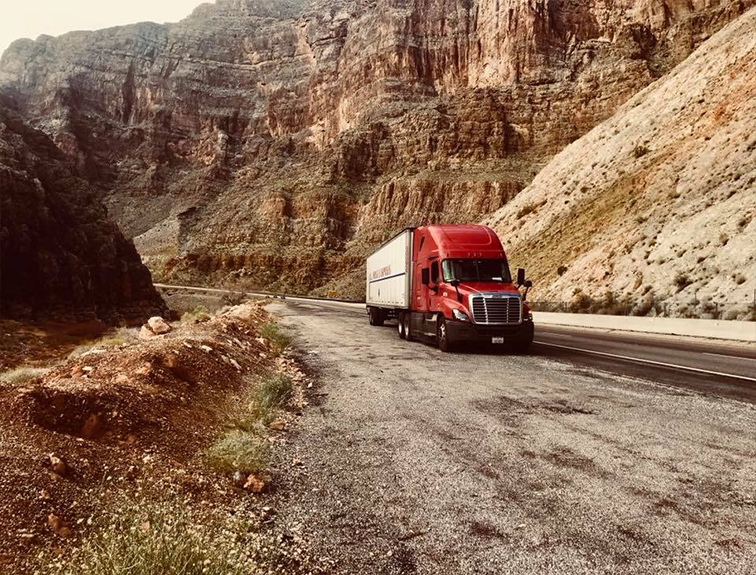 DDA: What company are you currently driving for, how do you like the career so far?

SH: I love it. US Xpress has treated me well. I am driving the Air Force truck from their Military Fleet. U.S. Xpress Wrapped six military-themed trucks, one for each branch of service to say thank you and represent our support for those who served and continue to serve our Armed Forces.

DDA: Do you have any long-term goals for trucking?

SH: I would like to become an owner-operator. I am two classes away from having a degree in business. To have my own company would be a new exciting adventure. 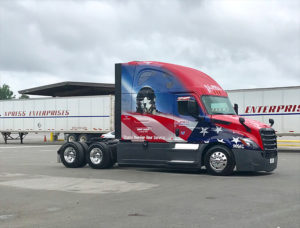 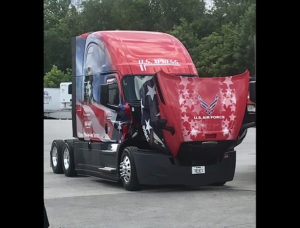 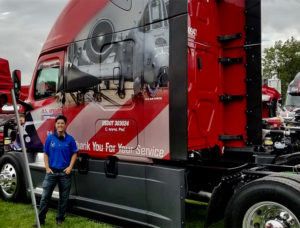 Summar, along with the nine other top finalists, will be recognized and honored for their contributions to the military and civilian sectors on Thursday, August 23, 2018, at the George W. Bush Library and Museum in Dallas, TX. The top three finalists will be announced at the Great American Trucking Show in Dallas (held Thursday, Aug. 23 through Saturday, Aug. 25 at the Kay Bailey Hutchison Convention Center) and will enter into a popular vote to determine who will be the ultimate recipient of the Kenworth T680.

Learn how you can use your military training and veterans benefits to start a career in the trucking industry. Get on the road to reaching your civilian career goals with CDL training from Diesel Driving Academy. Call us today to see how easy it is to get started. 1-800-551-8900

GI Bill® is a registered trademark of the U.S. Department of Veterans Affairs (VA). More information about education benefits offered by VA is available at the official U.S. government website at http://www.benefits.va.gov/gibill